Our Lady, St. Dominic, and the Holy Rosary

Our Lady,
St. Dominic,
and the Holy Rosary

In 1214, St Dominic was battling the Albigensian heresy which was well established in Southern France. They believed in two Gods; the good God created the spiritual world, and the evil God created the material world, including humans. This cult did not believe in the Trinity, Incarnation, and Resurrection; that God became man, nor in the divine maternity of the Blessed Mother.  Many were former Catholics. St Dominic took himself off to the forest and after three days of prayer, fell into a coma. Our Lady appeared to him and gave him the weapon which would defeat all heresies – the Marian Psalter. The psalter (based on the 150 psalms) had been prayed for centuries using a knotted rope, beads, or pebbles, however, St Dominic used the Hail Mary as the base, and arranged them into three sets of five decades. The Holy Rosary has been described as a Bible on a string.

In 1569, Pope Pius V’s Papal Bull established devotion to the Rosary. Two years later (leading up to the Battle of Lepanto) the pope asked that all the churches be kept open night and day so the faithful could pray the Holy Rosary. Pope Pius V attributed the victory at Lepanto, to the Holy Rosary.

‘If I had an army to say the Rosary, I could conquer the world.’ Blessed Pope Pius IX 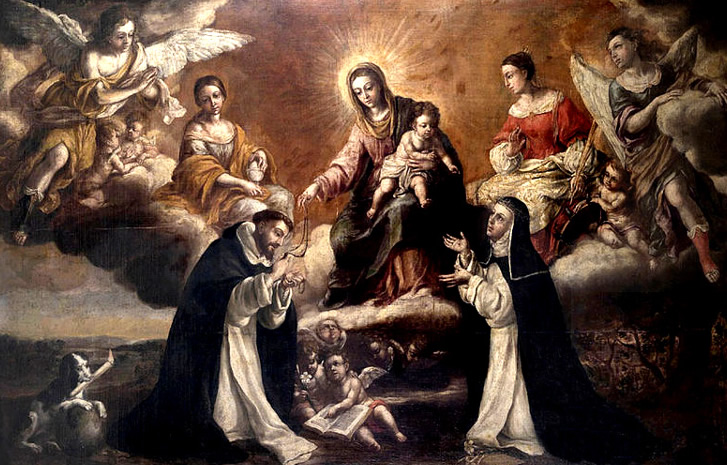