Our Lady of Mount Carmel of Garabandal

Our Lady of Mount Carmel of Garabandal

The Church maintains a ‘Neutral Judgement’ on Garabandal. It is neither approved or condemned, however, Canon Law allows Catholics to be informed and read accounts of what happened there.

St. Teresa of Calcutta was a staunch supporter of Garabandal, as was St. Padre Pio. In fact, he expressly asked that the veil which would cover his face after he died, be given to Conchita. Cardinal Ottavianni, Prefect of the Holy Office, called Conchita to Rome where she had a private audience with Pope Paul VI. The pope said, “Garabandal is the most beautiful story of humanity since the days of Christ. It is like a second life of the Virgin: on this earth we can never be grateful enough for it. I bless you Conchita; and with me the whole Church blesses you.” Sr. Lucia herself, asked Monsignor Venancio, Bishop of Leira-Fatima to travel to New York, twice, to meet Conchita. In July, 1983, the bishop told Fr. Combe, ‘This message given by the Blessed Virgin at Garabandal is the same message she gave at Fatima, but updated for our times’.  No one in the early 1960’s could have understood Garabandal’s message of – ‘confusion in the Church; many cardinals, many bishops, and many priests, are on the road to perdition and taking many souls with them; less and less importance is being given to the Eucharist’. Sadly, sixty years later we can. In 2019, Bishop Gavin Ashenden, Queen Elizabeth II’s former chaplain, converted to the Catholicism. Why? Garabandal!

When he was a young priest, the late Bishop del Val Gallo of Santandar witnessed three of the apparitions, so once he became bishop, he decided another commission was warranted. After gathering all the evidence, he sent it to Cardinal Ratzinger and as a result, all restrictions were lifted. Dr. Morales, a key person on the first commission that investigated Garabandal, admitted years later, he had intervened directly so the first commission would pronounce a negative opinion. On 30th May 1983, Dr. Morales (with Bishop del Val Gallo’s permission), hired the largest hall in Santandar and told a packed audience, “I was wrong. Garabandal is real.” Bishop del Val Gallo believed the messages of Garabandal were theologically correct and very important, but he thought the statement. ‘many bishops and cardinals were on the path of perdition,’ was a little harsh.

In 1961, Garabandal was a little hamlet, high in the Cantabrian mountains consisting of around 80 homes. They were a pious community and for 500 years, a bell was rung throughout the village calling people to pray the Angelus and the Rosary. On the 18th June, St. Michael the Archangel appeared to Jacinta Gonzales, Maria Cruz Gonzales, Conchita Gonzales, and Mari Loli. Two weeks later, on 2nd July, the Blessed Virgin Mary appeared to the children, dressed as Our Lady of Mount Carmel. Over the next four years, Our Lady appeared over two thousand times, in snow and rain, day and night, and each time she prayed the Rosary with the children. There so many miracles. In ecstasy, the girls heads were thrust backwards for hours; when lights were shone in their eyes during these long apparitions, they never blinked; they were pricked and burnt but did not respond; they crashed to their knees on the hard stones without flinching; in ecstasy with arms linked and heads back, they raced forwards and backwards up steep hills; and when pilgrims left Rosaries, medals and wedding rings, all tangled together for Our Lady to kiss, the girls with heads still back, were able to return each item to the rightful owner. Several strong men tried to lift the girls when they were in ecstasy but could not, yet the girls could lift each other with ease.

The children asked Our Lady to perform a miracle so that everyone would believe. Around 5,000 people were in Garabandal to witness the Miracle of the Invisible Host. Our Lady gave two messages to the children. She also placed great emphasis on the Holy Eucharist and referred to the future confusion in the Church. However, it is the future prophesies which define Garabandal. First, there will be a Warning. No matter where people are they will see their consciences as if standing before God. This is meant to turn people’s hearts back to God. Within that year there will be the Great Miracle – a sign in the sky over the pines in Garabandal. If people still do not repent, there will be a great Chastisement. Father Luis Andreu and St. Padre Pio saw the  Great Miracle before they died.

Repent and make reparation for yours and other’s sins, while there is still time. 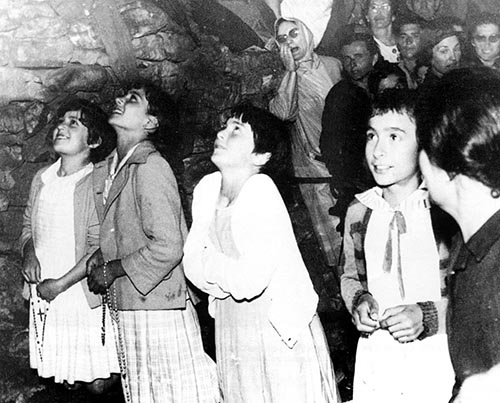 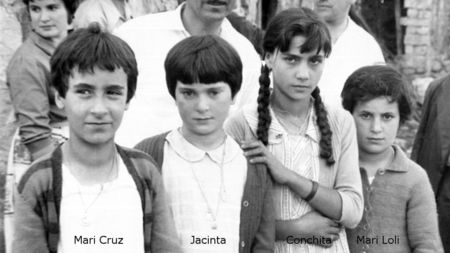