Our Lady of Akita

Our Lady of Akita

Agnes Sasagawa was always a sickly child but due to a medical mishap, she was left paralysed. It was the love and care Agnes received from a Catholic nun that helped her decide to become a Catholic. Although profoundly deaf, Agnes eventually entered the convent of the Handmaids of the Eucharist in Yuzawadai, Akita. In 1973 Sr. Agnes opened the tabernacle which housed the Blessed Sacrament and a great white light shone out. This happened almost daily from then on, and on one occasion Sr. Agnes saw angels surrounding the tabernacle, venerating the Blessed Sacrament. In July, Agnes felt a pain in her left palm and when she looked, there was bleeding wound shaped like a small cross. A few days later, Sr. Agnes was kneeling before Our Lady’s statue in the chapel, when suddenly the statue was bathed in light. Our Lady told Sr. Agnes she was pleased with the way she had offered up her sufferings and assured Sr. Agnes that one day her deafness would be cured. Our Lady also asked Sr. Agnes to pray for sinners. The following day, the wooden statue had the same bloody, cross-shaped wound in its left palm.

On October 13th, 1973, on the 57th anniversary of the Miracle of the Sun at Fatima, Our Lady appeared to Sr. Agnes with a dire warning for humanity. The behaviour of the world was worse than the Deluge, and if mankind did not repent, fire would reign down from the sky and the living would envy the dead. In fact in 1945, Pope Pius XII also said the world’s behaviour was worse than at the time of the Deluge.

‘The work of the devil will infiltrate even into the Church in such a way that one will see Cardinals opposing Cardinals, and bishops opposing bishops…. The Church will be full of those who accept compromise, and the Devil will press many priests and consecrated souls to leave the service of God’.

On 4th January 1975, Our Lady’s statue started to weep and continued until 15th September 1981, the feast of Our Lady of Sorrows. In total, the statue wept 101 times. It is suggested that this represents the first Eve; the world; and the second Eve. The blood and tears on the statue were analysed and found to be of human origin.

Bishop Ito of Akita saw the stigmata in Sr. Agnes’ hands, and also witnessed the statue weeping. After much investigation, he approved the apparition in 1984. On October 6th 2019, the day the Amazon Synod was opened in Rome, Sr. Agnes received another message. “Cover in ashes and please pray the Penitential Rosary every day. 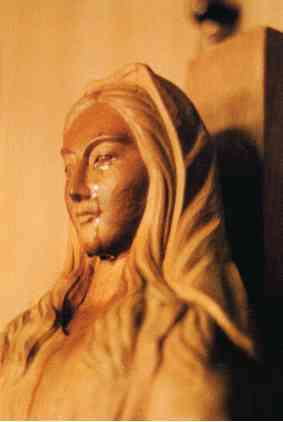