Our Lady of Guadalupe

Our Lady of Guadalupe

St. Juan Diego aged fifty-one, was an Aztec Indian who converted to Catholicism. Every morning he attended Mass and on 8th December, as he made his way to Mass, he heard angelic singing and he went to investigate. There before him stood a beautiful young woman. “Do not be afraid. Do not fear any illness or vexation, anxiety or pain. Am I not here who am your mother? Are you not in the folds of my mantle? In the crossing of my arms? Is there anything else you need?

Our Lady asked St. Juan to go to Bishop Zumarraga and ask for a church to be built. Juan Diego did as the lady asked, but the bishop was not convinced and asked a sign. The bishop was from Castille Spain, and even though it was winter, he asked for ‘some Castilian roses’ – a seemingly impossible request.

St. Juan’s uncle was extremely ill, so he decided not to meet Our Lady but go by a different route and visit his uncle instead. Our Lady however, intercepted St. Juan and assured him at the very moment his uncle was cured. She instructed him to gather the flowers at the top of the hill, and personally arranging them in St. Juan’s tilma, Our Lady asked St. Juan not to show them to anyone but the bishop,

As St. Juan opened his tilma a cascade of Castilian roses fell to the floor, and on the tilma was the miraculous image of Our Lady of Guadalupe. It is like a pictogram – the dark woman (‘one of us’) was about seventeen and pregnant. The colours on her dress depicted royalty; she was in front of the sun and standing on the moon, i.e. greater than their sun or moon gods; yet she was gazing down in humility – she was not God; the open flowers exactly depicted the location of the active volcanoes, and the closed flowers, the volcanoes that were extinct. The image is not painted on and is still vibrant 500 years later even though tilma’s usually disintegrate after about eight years. Scientists, using the latest technology saw thirteen people reflected in Our Lady’s eyes. As millions of Catholics left the Faith in Europe as a result of the Reformation, 8,000.000 converted to the Faith in Mexico in just seven years. Our Lady of Guadalupe is the Patron saint of Mexico and protectress of unborn children.

In 1531, Bishop Zumaragga included the whole of North America in his diocese. In 1945 Pope Pius XII dedicated Our Lady of Guadalupe as ‘Empress of the Americas’.

Our Blessed Mother loves us and wants us to choose life, not death. 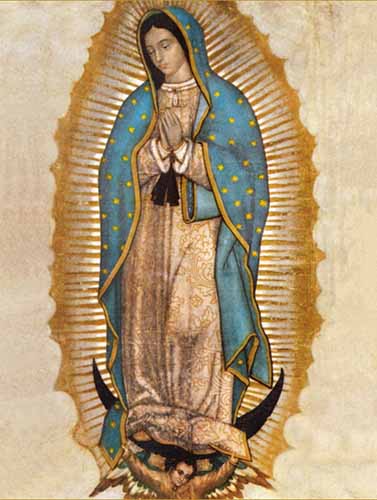 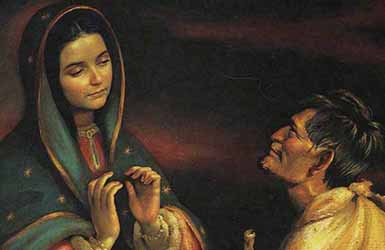 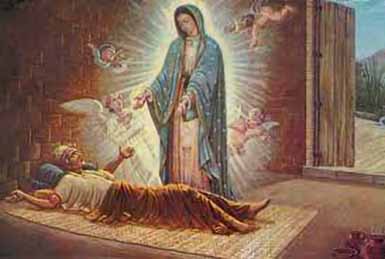