Our Lady of Lourdes

Our Lady of Lourdes

The mid-19th Century was a period of great turmoil in France. Bernadette Soubirous, the eldest of an impoverished family in Lourdes, was a virtuous but sickly child and due to family circumstances, hardly ever attended school. In 1858, Bernadette was 14 and still had not made her First Holy Communion, On the 11th February, Bernadette, her sister and a friend went to the cave near the Gave River to collect firewood. Bernadette was unable to cross the river and while she waited, a lady appeared to her. According to Bernadette she was extremely beautiful and looked about 16 to 17 years old. Her arms were outstretched in a welcoming gesture, and she was dressed in a white robe with a blue sash. On her arm was a large Rosery and she had yellow roses on her feet. The lady asked Bernadette to return and although her parents were conflicted, they knew Bernadette had never lied to them before. Each time Our Lady appeared; she prayed the Rosary silently with Bernadette. In total, Our Lady appeared 18 times, the last time on July 16th, the feast of Our Lady of Mount Carmel.

Doctors studied Bernadette very closely while she was in ecstasy. One sceptic was deeply impressed when Bernadette did not react when a candle appeared to burn her hand. The reverent way Bernadette made the Sign of the Cross also touched hearts. Although Bernadette suffered from asthma, she was able to run at speed (faster than anyone else) down the hill to meet the beautiful lady. On one occasion, Our Lady instructed Bernadette to dig in the ground and although people thought she was mad, a trickle of water appeared and turned into the miraculous healing spring of Lourdes.

Our Lady said to Bernadette, “I do not promise to make you happy in this world but in the other.” On March 25th, the Feast of the Annunciation, Our Lady told Bernadette “I am the Immaculate Conception.” Pope Pius IX had proclaimed this Dogma, four years earlier in 1854. Bernadette eventually became a religious sister and died at the young age of 33. Her incorrupt body is in Convent of the Sisters of Nevers.

Pray the Rosary every day. Our mother, the Immaculate Conception, wants to shower us with graces. 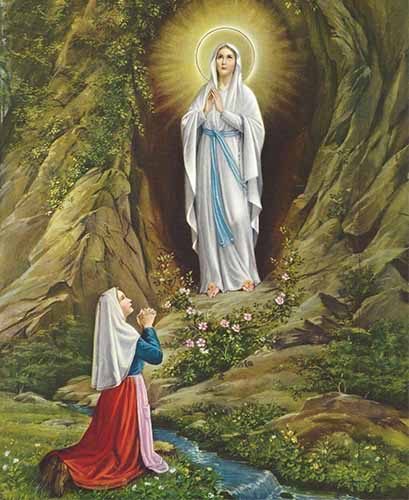 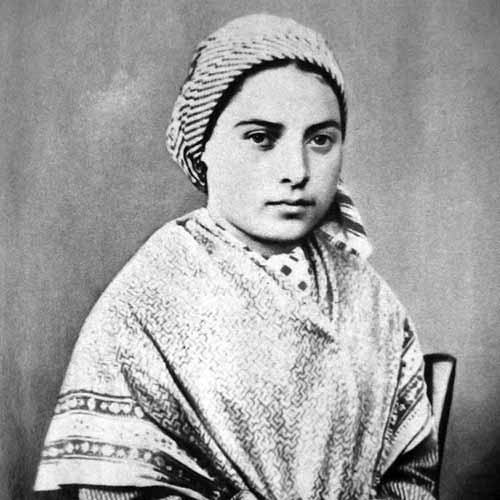